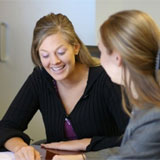 Read this interview with a real sleep study patient. She anonymously shares her experience using a question and answer format. Her story gives insight to patients who may be scheduled for sleep study testing. It also provides some feedback as to frustrations sleep study centers may need to address.

This is a real interview conducted with a sleep study patient. In this interview she discusses her reasons for seeking treatment, as well as the fears and anxiety she experienced regarding the polysomnographic testing. In the end, she is pleased with the results and is continuing to pursue appropriate treatment for her sleep disorder.

What complaints resulted in your doctor referring you for a sleep study?

I seemed to sleep a lot, and yet was still sleepy all the time. I had been coping with this for a long time-months…maybe years. Friends who had sleep studies told me I needed to have one, but I ignored them. Then, I got the opportunity to take in a foster baby. Caring for a newborn is very demanding. I needed to be on my toes all the time. I was really concerned that the baby would cry and I wouldn’t be able to wake up and care for her. I mentioned to my doctor that that maybe I needed to go for a sleep study. I told him I was tired all the time, even though I seemed to be getting plenty of sleep. He agreed this would be a good idea. I am quite overweight, and he said sleep anomalies were a common complication of obesity.

I was referred to a local sleep clinic. At my first appointment the doctor went over what sleep apnea is and its causes. He said my problem could be in a problem with my throat. It may close up during the night. He also said that being overweight plays a part in sleep apnea and so does genetics. He showed me the masks and cannulas that we might use. Then I toured the room where the study was to be done. It was just a small room with a bed and a nightstand. There was a camera on the ceiling and they said they would be observing me to see evaluate what was happening while I slept.

A few days later I was scheduled for a polysomnography. That’s what they call a sleep study. I was told no caffeine, no alcohol, and don’t sleep during that day. I napped anyway but still zonked out pretty quick. I was told to wear comfortable clothing to sleep in. I wore an old T-shirt and gym shorts. They have to hook wires to your head and legs, so you need to wear something that allows them to easily access your legs. I was told to report at 10:00 pm and they were done about 5 in the morning. I was worried about snoring and didn’t want to be embarrassed. I was also a little apprehensive about someone watching me because that’s just weird. But I knew if I wanted to get better I’d have to hang in there. I was also afraid that I wouldn’t be able to fall asleep. But they turned out the lights and in no time at all I was asleep. The next thing I knew they were waking me up to go home. I was scheduled another appointment to come back for the results a few days later.

They said I do have sleep apnea. Number 9 – whatever that meant. I wish they had given me a handout or something. I don’t really remember much of what I was told. The appointment lasted only about five minutes. I was actually kind of aggravated that they had me come in for only a five minute appointment. They could have told me over the phone. I told the technologist that I wasn’t surprised I had sleep apnea, because I am so fat and overweight. She was very nice. She told me she and her brother were both tested for sleep apnea. She is fat and fine but her two skinny brothers both have sleep apnea. They told me my breathing stopped several times an hour and my pulse oxygen content went down to 88. They said I was a quiet snorer. I have no idea what that means. She did say that factors that play into sleep apnea are a family history of the condition, as well as obesity, a large neck, or a recessed chin. It is more common in males, African Americans, smokers and drinkers.

I had to come back for a second night at the lab. I was hooked up the same way, but during the night they woke me up and tried different masks on me. Then they sent me home.

Soon, I was back again for more results. They told me the pressure number for my machine and asked me who I wanted to get my CPAP machine from. I was aggravated once again. It was another five minute appointment. I had to travel an hour to get there and had to get a babysitter for what turned out to be a five minute appointment. I didn’t see the doctor again. I thought this was really unreasonable.

I picked up the machine. It seems like I waited a couple of weeks before it was ready. I started out with a nasal cannula. I’ve used it several weeks now and have decided to switch to a regular face mask. I tend to do breathe through my mouth a lot and the nasal mask was not a good choice for me. I remember they told me that I was a mouth breather. Given this, it would have been nice if they had recommended I start with a face mask.

Right now, I really can’t tell that the CPAP machine is helping me much. But, I think the problem is that I need a different mask. I do use the machine most of the time and plan to stick to it.

At first, I worried about the noise of the machine. It doesn’t both my husband at all because he uses one also. But, I was afraid that it would be too loud and I wouldn’t wake up when the baby cried. That didn’t turn out to be a problem. I can still hear the baby.

People tell me it can take several months to get the machine and mask adjusted right and to get really comfortable with the system. I am working on it and continue to hope this will help me with my excessive daytime sleepiness.

Karen L. is a real patient from the Western North Carolina area. She has shared her story with the hope that those needing treatment will be less anxious after having read her experience. She also hopes that treatment centers will pick up on her frustrations and streamline the testing process.

Registered Sleepers, Inc does not recommend the self-management of health problems. It does not endorse or recommend any particular type of medical treatment. Should you have any health care related questions, please promptly call or see your physician or other health care provider. Never disregard medical advice or delay in seeking medical advice as a result of something you read on this site.